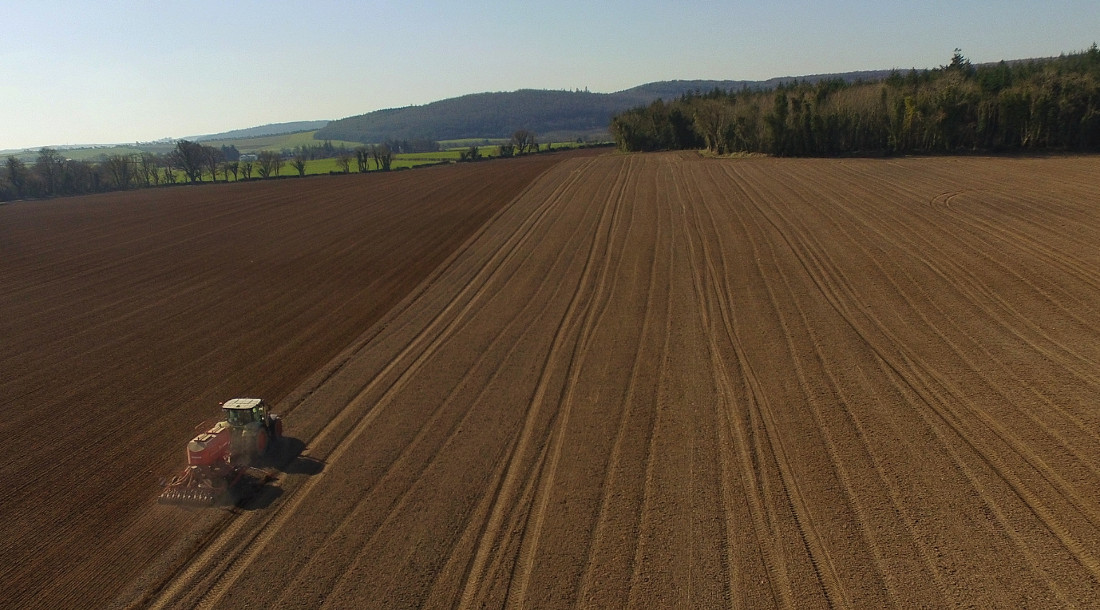 If you want to reap, you have to sow.

If you were a PR agency drawing up a marketing plan for malting barley, you'd base it around harvest time. Lots of pictures of combines rolling through golden fields under blue skies, with the fruit of the year's work being collected up and brought into the barns. Sowing isn't nearly as sexy. Cold, brown fields just don't have the same visual impact, but from a farming and brewing point of view, it's probably a much more important operation.

Tús maith, leath na hoibre and all that. If you can get barley sown in good time and good conditions, it's a major step in getting a decent yield and the right quality at harvest time. You're still relying on a bit of luck with the weather later on in the year, but you stand a much better chance than if you're forced to sow late, or if you panic and try and put it in when the field conditions aren't yet good enough.

The old saying was that you wanted to have started getting seed in the ground by St Patrick's Day, and that's still pretty much true today. Here at Ballykilcavan, we're growing our own barley to use in the brewery, but we also grow distilling barley for Waterford Distillery. The main difference between the two is that the distillers want as low a protein level in their barley as they can get, and the best way to achieve that is to sow it as early as possible so that the barley has more time to use up all the nitrogen in the field (nitrogen being the main component of protein production). There's a compromise though between letting the field dry up enough after the winter and sowing as early as possible, and for us, we'd be happy to sow distiling barley in the first week in March. For the brewery, we'd like a little bit more (but still not too much) protein, so there's less pressure on early sowing, but if you get the chance to put it in early, you sow it, because this is Ireland and once it starts to rain, it might forget to stop.

We've had almost every combination of sowing seasons over the last four years here. 2018 was the year of the Best from the East, when we had 20cm of snow on the ground at the time when we should have been planting. We ended up sowing all our barley in mid-April, and even at that, the field conditions weren't great after the snow. With a combination of late sowing and a summer drought, we had low yields and high proteins across the board - eaily the worst harvest I'd ever experienced since I took over the farm in 2004. 2019 in contrast was about as good a year as you could ask for - we got the distilling barley sown on the 28th of February and the brewing barley in mid March, and with a kind summer, got record yields and good protein levels. 2020 started off fine, but the drought during the first lockdown in April and May, meant that the plants never developed properly, and we were back to low yields and high proteins.

We're under double pressure here. If it's a bad year for barley, it affects the farm income, but also the quality of the barley we have to brew with. We try to mitigate this by keeping enough barley from every good year to cope with a subsequent bad year, and so far that's been fine - we've never had two bad years in a row. After a less than ideal 2020 harvest, we're hoping that 2021 will bring better results, so it's a huge relief to have sown all our barley over the weekend in pretty good conditions. It means that I can stop watching the long range weather forecasts, relax a little bit and start to look forward to the first green shoots of the season appearing in about two weeks' time. The PR people will be happy that the fields are turning a more photogenic green, and I can have sleep a bit easier knowing that we've given our barley the best possible start in life.

← Back to main blog page